It was an absolutely perfect weather day for the Whitefish Women's 18 Hole League 'Northwoods Classic' Invitational.  The traditional theme "Northwoods Classic" was carried throughout the decorations in the dining room, directed by member Linda Randall.  Table centerpieces were birch bark hollows filled with evergreen, birch and dried hydrangea blossoms.  Even a carved "Smoky the Bear" met the players on Hole #1!  Committe members each wore a ranger hat, to be easily recognized.

The Game of the Day was a 2 person best ball.  There were 4 flights, and 2 teams placed in each flight.

In Flight A, the winning team of Joan Hasskamp (Cuyuna) and Debra Enger shot a Net 60 for 1st Place.  Second place went to the team of Dorie Kaleva and Susan Walstrom, with Net 61.

A breakfast buffet of deviled eggs, fruit, and assorted breads and pastries where provided to all of the participants and staff, compliments of the League women.   Following the round, Bogey's Grill provided a buffet lunch of deli meats, cheeses, potato salad, coleslaw, and cheesecake dessert.

Then came the many prizes with Myra Faust, who chaired the event, as emcee.  Steve Bengtson of Whitefish Golf donated  2 gifts of 2 rounds of golf each, which were drawn from the Early Bird registrants, those guests who had registered prior to the June 8th deadline.  In addition, Bengtson donated 2 certificates for $25 each to be used in the Pro Shop, and offered an additional discount on all Pro Shop goods for the day.  That was a win-win for everyone!

In addition to the flight and proximity prizes, there was a 50/25/25 raffle, with each of 2 winners collecting more than $100.  The Loon Lottery was a raffle drawing for 4 items including wine, champagne, a handbag, and a set of handmade greeting cards, donated by member Nancy Schmidt.  And the infamous Money Tree!  Numbers were drawn for players to select one of 9 envelopes from the Money Tree.  Each envelope contained from $20 to $55. 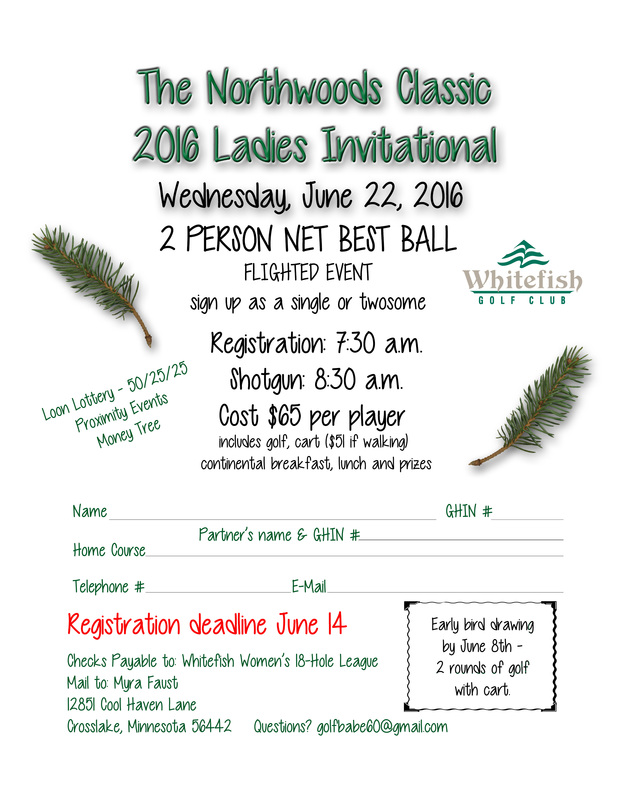